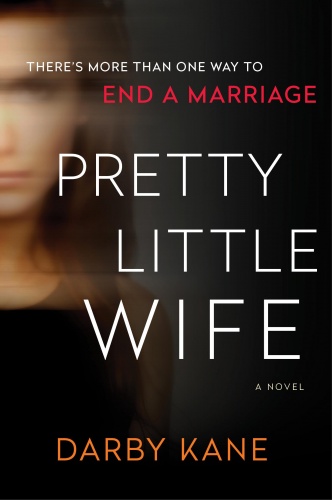 Lila Ridgefield lives in an idyllic college town, but not everything is what it seems. Lila isn’t what she seems.

A student vanished months ago. Now, Lila’s husband, Aaron, is also missing. At first these cases are treated as horrible coincidences until it’s discovered the student is really the third of three unexplained disappearances over the last few years. The police are desperate to find the connection, if there even is one. Little do they know they might be stumbling over only part of the truth….

With the small town in an uproar, everyone is worried about the whereabouts of their beloved high school teacher. Everyone except Lila, his wife. She’s definitely confused about her missing husband but only because she was the last person to see his body, and now it’s gone.

Pretty Little Wife is domestic suspense at its best, with a chilling premise that keeps you guessing to the last page. Add Darby Kane to your must-read list! –New York Times bestselling author, Wendy Corsi Staub

Darby Kane has her own Facebook page! She’ll be posting some snippets there from PRETTY LITTLE WIFE. Visit and like the page to make sure you’re up to date on all things Darby. 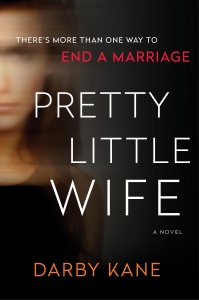 She missed the signs before. Maybe ignored them without fully realizing it. Now she couldn’t unsee them.

Adrenaline raced through her as she tore their bedroom apart. Overturned the laundry basket and scattered the contents. Shoved the bed, banging her shin on the metal bedframe before pushing the mattress to check underneath. Crawled on her knees across the floor, ignoring the shooting pain as bone struck hardwood. She even checked behind the heavy curtains he insisted they use because light in the morning gave him a headache.

The revulsion festering inside her, carefully tucked away for years so as not to spill over and contaminate their tenuous peace, exploded. A wave of scalding heat ran through her, poisoning and erasing every good memory.

The stupid curtains. She’d searched for weeks for the combination of the right color and perfect dark liner he barked at her to find. Never mind that she preferred waking up to the light pouring in or that the heavy material gave the room a suffocating sense of darkness.

His rules and his needs.

All of her energy—all of that pent-up hate—built and concentrated until it boiled. The slights and snide comments she’d ignored. The frustration she’d choked back. The disappointment that she’d let her need to feel normal, to mimic everyone around her, lead her here. To him.

Throwing all her weight into it, she tugged and yanked on those precious curtains. Pulled as a scream rumbled up her throat. A ripping sound screeched through the room and her balance faltered. The stiff material she’d pulled painfully taut at last gave. The left side shredded on the rod and the pressure holding her up released in a whoosh.

Her feet tangled and she fell. She landed in a hard sprawl near the end of the bed then stayed there, staring at a blank space on the white wall. Wishing she’d made better choices.

There in the quiet, she heard the snap. That barrier deep inside her, walled off and hollow, that allowed her to stumble along, ignoring what she needed to ignore and focusing on getting up and moving every day, crashed down. Anger and distaste, disappointment and guilt. The emotions tumbled and mixed, spilling through her, flooding every cell.

As soon as the rush of flaming heat arrived, it evaporated. Dried up and disappeared in the space between breaths.

is available for preorder in the following formats: 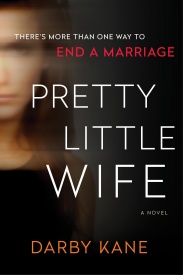